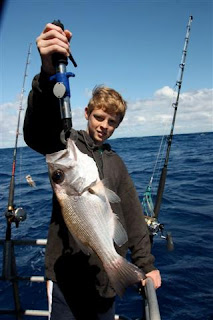 WHY DID I BOTHER?With regards to the six week ban taking Snapper, Pearl Perch and Trag back in December, posted letter to state minister for primary industries.
I basically wanted to know why he had signed off on this policy with no understanding on how it would impact on charter operators in SE Queensland, and do absolutely nothing to assist the sustainability of these fisheries.
4 Months later this was his reply
Dear Gary
Thank you for your letter of 15 Dec 2010 to the Honourable Tim Mulherin MP, former Minister for Primary Industries, Fisheries and Rural and Regional Queensland concerning management of the Queensland Rocky Reef Fin Fishery. As the issue now falls within MinirterWallace's portfolio your letter has been referred to me for direct reply.
The Department of Employment, Economic and Innovation (DEEDI), has released a (RIS) proposing new management arrangements for the fishery, aimed at effective management of Snapper stock over a 10 year period.
As an update I can advise that the Queensland Government has decide to remove the proposal to charge a fee for recreational snapper permit. Consultation about the rest of the proposals presented in the RIS closed on 8 April 2011.
Thank you for your interest in this matter I have forwarded your comments to Fisheries Queensland For consideration.

WHY DID I BOTHER?
BRING ON THE NEXT STATE ELECTION.
Gold Coast Fishing ReportFishing the wider grounds off Point Lookout producing quality Pearl Perch. Snapper showing up in good Nos on the 36 fathom reefs (smallish fish) in close off the Gold Coast fishing slow with only a few trag.
To Fish the Cathedrals and Point Lookout reefs with Frenzy Charters  CLICK HERE
Posted by Brisbane fishing at 4:30 PM